This is the time of year when the Gnome and Crone’s fancy turns to thoughts of maple syrup. Yes, we make our own. It’s foraging at its sweetest and just one more door to modern homesteading.

It’s no way to save money, though. There’s a reason real maple syrup costs more than the gooey stuff made with corn. We figured our first cup cost us a hundred dollars in materials alone. If we factored in labor, the real cost would quadruple—or more.

First we had to buy taps (or spiles), blue sap collection bags, and metal bag holders. There are cheaper ways, like making your own spiles with sumac stems and hanging buckets under them to catch the sap. We tried that, but the buckets filled with bugs and bits of bark, and the sap didn’t always make it into the buckets. So we opted for a closed system.

Our sap-collecting system at work

Nor did it take many days of standing in the rain, wind, cold, and snow to decide that there had to be a better, if more expensive, way to monitor the heating and evaporation process.

We bought a turkey fryer and a couple of twenty-pound propane tanks and moved the operation to our covered deck.

With glass doors leading to the deck, we’re able to check on the syrup-making progress from the warmth of indoors, and it also allows us to do a few other chores during the hours and hours of watching the pot boil. It takes a lot of boiling to turn tree water into syrup. Ten gallons of sap will make only one quart or so of syrup.

The Gnome hauls eighty-five pounds of maple sap with each trip from the woods to our deck where it goes into the pot to boil. This amount will yield about a quart of syrup.

But you can never take your eyes off the pot for very long, especially as the sap begins to thicken, or you’ll find yourself with burnt caramel seriously stuck to the bottom of your pot. (Ask me how I know.)

Of course, our cost has dropped with each batch since most of those supplies were a one-time expense. Our method will never win any awards for efficiency, though, partly because of the on-going propane expense. Still, we keep at it. At the end of a good season, we find ourselves with twenty or thirty pints of that sweet amber liquid, enough to enjoy a year’s worth of maple syrup over pancakes, on yogurt, with acorn squash, in smoothies, and still have plenty to share with friends and relatives.

The syrup-making season is short and unpredictable, especially where we live. Conditions for collecting sap have to be just right: night temperatures in the 20s and sunny days in the 40s, all before the trees begin to bud. The last couple of years haven’t been good ones.

So, why do we do it? While living frugally is part of our mantra, homesteading—modern or not—isn’t always about frugality. It’s more about being in touch with nature, about discovery, about doing for oneself, as well as the self-confidence, knowledge, and self-awareness that go along with all that. We like knowing that if we have to, we can. Whatever it is.

Besides, there’s nothing quite like the light, sweet taste of warm maple syrup you’ve cooked up yourself. 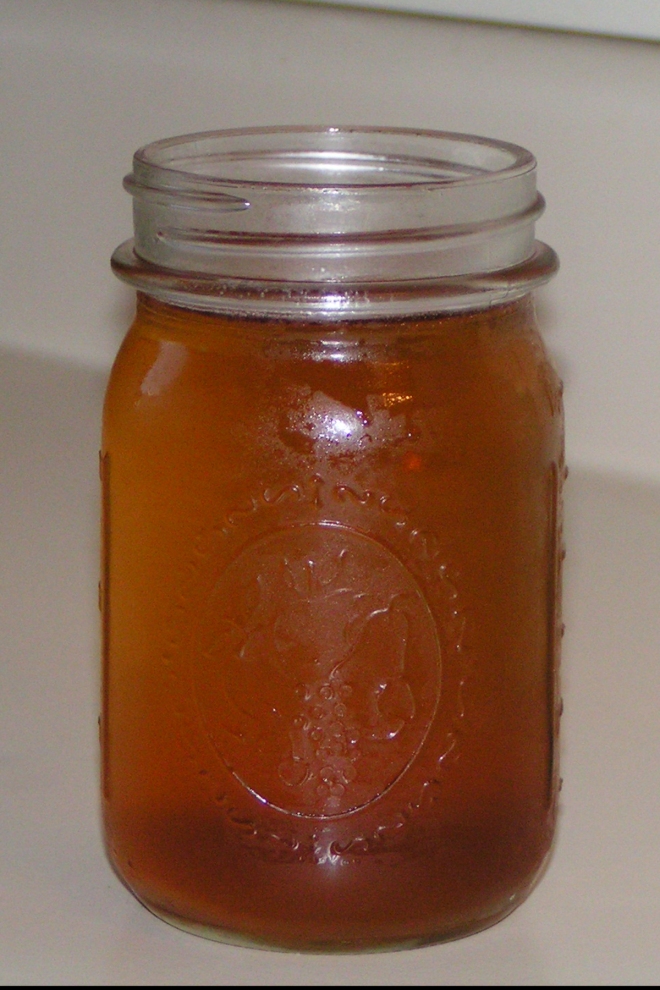 One pint of  homemade maple syrup coming up

2 thoughts on “Food in the Forest”