(Last week, I wrote a story about my dad. It’s only fair to share something about my mother, too. This piece, in a slightly different form, originally appeared in the Asheville Citizen-Times.)

My mom has a reputation. It’s all about her sunny disposition, her ever-present smile, her consistently quiet and pleasant manner. So perhaps it’s understandable that I’m drawn to stories about the times her temper has gotten the better of her.

At ninety-three, she’s had plenty of opportunities for temper tantrums, but I can count hers on one hand and still have a finger or two left over. One of my favorites goes like this:

Mother was nineteen or so when she was at the stove in her family’s kitchen making candy for her boyfriend (who later became my father). With her sisters gathered round, the inevitable teasing began. Mother didn’t like being teased, especially when it came to matters of the heart. Her anger only egged her siblings on. Finally, she’d had enough. In her fury, she flung the entire pot full of boiling candy mixture across the room.

The hot, syrupy liquid missed her sisters, but it landed on a glass pane of the back door, oozing down in a streak. When their father came in from his day’s chores, he saw what looked for all the world like a crack in the glass. Frugal man that he was, he saw repair bill dollar signs and was ready to mete out some harsh punishment for the perpetrator.

The girls were quick to set him straight. What not one of them was willing to do, though, was to clean up the mess. Mother’s righteous indignation prevented her from doing the job, and her sisters refused all responsibility—after all, they hadn’t thrown the stuff. The hardened candy remained where it landed.

As the years passed, no one could any longer recall how long the streak stayed there or who finally broke down and cleaned it. They never forgot the event, itself, though, and often when they got together, one or another of them would retell the tale to everyone’s delight, even Mother’s. 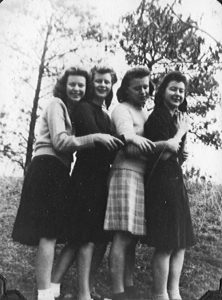 4 thoughts on “The Candy Incident”