Several folks have asked that I write more about our experiences related to moving here, hand-building our home, and trying to live more sustainably. I’m tackling that project, but it’s a big one. In the meantime, how about I leave you with our favorite pumpkin soup recipe?

We’re pumpkin fools around here. It all started a few years ago when I was browsing through a seed catalog and my eyes fell upon these words: Baby Pam pumpkin. Pam’s my mother’s name. That’s all it takes for me to become infatuated with a plant—a name that rings my chimes. (I’d be terrible betting on the horses!) The Baby Pams were great eating pumpkins, but awfully small, maybe softball size. It was always guesswork figuring out how many we needed to, say, bake a pie, and too often we found we hadn’t cooked up enough of the vitamin-rich orange flesh.

But the lure of pumpkin growing had gotten under our skins. With their bright colors, huge leaves and sprawling vines, we were hooked. And there was this plus–pumpkins store well, which means good eating well into winter with no up front preserving effort. All you need is a cool, dark place. A basement or unheated closet will do.

Catalog pages were filled with colorful displays–so many varieties. We got carried away with the weird-looking pumpkins: the green ones, the white ones, the ones with warts. Most of those were more for decorating than eating. We thought the grandkids might enjoy using them at Halloween. But they never did particularly well in our garden.

After that experiment, we read about Long Pie pumpkins, also called Nantucket Pie.

Various pumpkins and other winter squash from our garden

An heirloom variety, the Long Pie is known for its sweetness, and it has very little of the stringiness pumpkins are known for. If you were to see it in the garden, though, you might think it was a zucchini on steroids with its elongated shape and dark green skin which rarely fully ripens to a deep orange until it’s in storage. Since trying our first Long Pie, we’ve never so much as looked at another pumpkin variety. 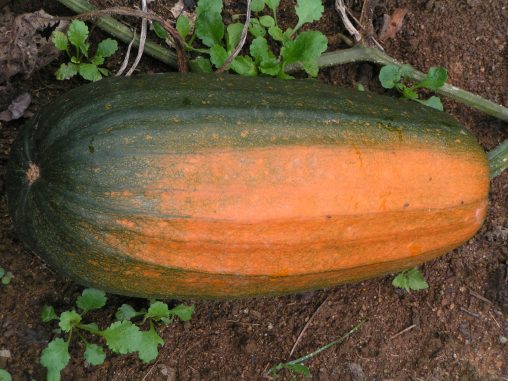 But the problem with Long Pies, if you can call it a problem, is that they are both prolific and pretty good-sized. On average, they weigh five to eight pounds apiece—we’ve had some quite a bit heavier. One is always enough for a pie. In fact, whenever we’ve roasted and pureed a Long Pie, we’ve usually had extra to put in the freezer for some unknown future use. The last year we kept a record of such things, we harvested more than 250 pounds of Long Pies. That’s a lot of pumpkin. And just how many pumpkin pies can two people eat, anyway? (The Gnome says, “A LOT!”)

So we began looking for other ways to use pumpkin. We’ve substituted it for sweet potatoes, we’ve made pumpkin bread, pumpkin muffins, pumpkin chili, pumpkin risotto—all delicious, by the way. But our favorite alternate use for pumpkin has got to be this cream of pumpkin soup, especially on chilly winter nights. The cream makes this dish extra smooth and rich. Add the cinnamon croutons and it’s a standout.

Of course, you don’t have to grow your own pumpkin to make this pie, nor even buy it fresh (though if you do, you’ll need to roast and puree the pumpkin first.) A can of pureed pumpkin will do fine. Just be sure you don’t accidentally buy pumpkin pie mix.

Unfortunately, I don’t know where I found the recipe for this soup, and I hate not giving recognition. I’ve searched my cookbooks, recipe cards, and online favorites, all to no avail. I found one that’s awfully close, though, from Judith N. over at the Food Network website. Since I can’t find the exact recipe I use, why don’t I just go ahead and give her credit?

For the croutons, combine butter, brown sugar, and cinnamon in a small bowl and mix well. Spread this mixture evenly over one side of each bread slice. Place bread, buttered side up, on a baking sheet. Bake until bread is crisp and topping is bubbly, about 10 minutes. (You may want to do this step ahead of time to give the croutons time to crisp up as they cool.) Cut each slice of bread into bite-sized pieces.

Saute onion in butter in a saucepan (one that will comfortably accommodate eight or ten cups) until tender. Add half the broth and stir well. Bring to a boil. Cover, reduce heat, and simmer 15 minutes.

If you have an immersion blender, use it to process the mixture until it’s smooth. Otherwise, transfer to your blender or food processor for blending. (When it comes to outfitting the kitchen, I’m kind of a minimalist, but an immersion blender is a wonderful tool to have on hand. It works like a charm, saves on dirty dishes, takes up very little real estate, is easy to clean, and is relatively inexpensive. So glad I finally learned about this device.)

When the soup is cooked, you have a choice. You can add the cup of whipping cream to the entire mixture and warm, being sure not to boil the soup or scorch the cream, but it’s much prettier to dip the steaming soup into serving bowls and swirl the cream directly into each bowl, approximately 2-3 tablespoons per bowl. Top each serving with cinnamon croutons, and call everyone to the table for some super deliciousness.

(Disclaimer: No chefs live here. But with a great big garden, we’ve discovered lots of terrific recipes–mostly simple to make and without exotic ingredients. I enjoy sharing our finds with others just as much as I enjoy being on the receiving end. I do try to be clear, accurate, and thorough, though. And I can promise that all the recipes I put on my blog have been rigorously taste-tested right here at Living on the Diagonal and have received the Gnome’s seal of approval.)