(This year marks the 250th anniversary of Daniel Boone’s first trip to Kentucky from North Carolina. The trip was filled with adversity. It reminded me of our own journey—especially since our path was similar to Boone’s except in reverse.)

Two hundred and twelve years after Daniel Boone left western North Carolina for his first foray into Kentucky, our family of two adults and two young children made its way from Kentucky to a new life in western North Carolina. Our adventures weren’t nearly such a hardship as the Boone band’s, but plenty hard, nonetheless.

Our plan was simple: camp out on our newly purchased land while we hand built—all by ourselves—our forever home. Reality was a little more complicated. For one thing, we had no jobs. For another, we had almost no money. Our budget was shoestring for sure.

For the younger campers, the best part of our earliest days of adventure revolved around the campfire.

The excitement of tent-camping in the wild far outweighed the inconvenience of having neither water nor electricity. We cooked over a campfire. A rhododendron thicket was the perfect spot for a pit toilet. We drove to a roadside spring to collect water. We hiked to a creek in the woods when we were desperate for an all-over, if frigid, bath. The return hike uphill sweated off our clean.

Daily thunderstorms sent us to the relative safety of our steamy car. Soppy sleeping bags regularly sent us to a laundromat in town. The effort of camping precluded any progress on building. We had to make alternative plans.

Instead of building our house, we built a very temporary shelter. It was all of 8′x12′, barely large enough to hold two cots and a double sleeping bag. The plywood floor kept us off the ground. We wrapped the lumber framework with inexpensive clear plastic for make-do walls and roof. Instead of a door, we had an opening covered with a tarp. 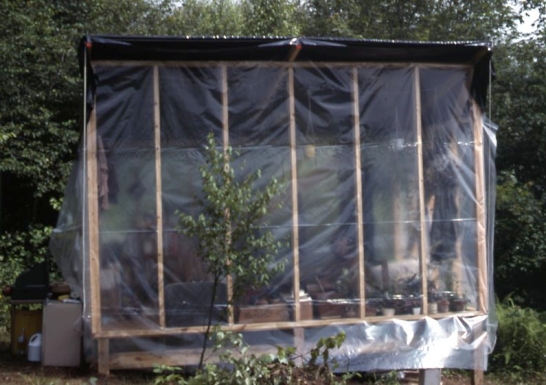 Our “kitchen” is outside on left end of shed. The doorway is also on the left end. Look carefully and you can see a suitcase and canned goods lined up along our front “wall.”

During the day our shed, as we called our new quarters, was a stifling greenhouse. Mountain nights were a different matter. We wrapped ourselves in sweaters under our blankets. Then the rains came, and the winds, in the form of an inland hurricane. Our  “walls” were decimated. The black plastic “roof” caved in. We were forced to invest in slightly sturdier materials.

It was a mess!

Finally, we could complete our building plans, which meant we could have a temporary power pole installed. Electricity made it ever so much easier to build, though the only power tools we had were a drill and a couple of circular saws. Nonetheless, progress was slow with two novices working on our first significant building project, learning as we went.

As the nights turned colder, we used a space heater to keep relatively warm, but with no door, much of the heat escaped. December’s bitter cold found us huddled over the heater more often than pounding nails.

Finally, it became too much. At 1:00 pm on December 20th, when the temperature dipped to five degrees and was heading lower and our water containers and canned goods were frozen solid, we faced the inevitable and moved into a one-bedroom apartment in town until warmer weather descended.

The state of things when the weather got the better of us.

In spite of the cold, we managed to get some work done on the house throughout the winter. Four months later when we returned to our mountain place, we moved into our home, a structure that barely qualified as a shell. Loose plywood covered the floor joists. Blackboard sheathing was the extent of our walls—no siding, no insulation, no drywall. Our plan called for lots of south-facing windows, but we had no windows. Once again, we used plastic to protect us from critters and the elements. A construction site heater warmed us during our morning bathing and dressing routines. We still had no running water and what little electricity we had access to still came from the temporary pole. Of course, we didn’t have a phone.

Except for the plastic we installed over the window openings, this is how the house looked when we moved in.

It would be another year before we got those modern conveniences and many more until our house was what most folks would consider properly finished. But we persevered.

Other than a coat of paint on the window trim (see where we’d started, upper right) and vent openings below windows, this was as finished as our house got until thirty or so years later when it got a total facelift–standard windows, horizontal siding, awnings, and more.

Almost forty years later, our daughter says our years of living in the wild brought our family closer together and notes that her somewhat unusual childhood always makes for a good conversation starter. Our son, wanting his own children to experience the kind of life he had as a kid, has begun a homebuilding venture of his own. The Gnome and I are still here, still working on our dream home. We are here to stay.It was an undertaking of our own choosing, born of youthful enthusiasm and sheer ignorance. Had we known what we were getting into, we might still be in Kentucky today. But we’d have missed out on the adventure of a lifetime.

(To read more about our homebuilding adventure, check out the nine-part series beginning here. Unrelated posts are interspersed, but you can scroll past those if you choose.)