In my previous blog posts about our big road trip last fall (start here to catch up), I focused mainly on the unexpected things that happened-. They came upon us with such frequency and regularity that they became the grand theme of our grand trip. But—and this is a big but—we’d incorporated a lot of standard vacationey activities into our travels, and they were grand, too.

We visited four national parks and found ourselves in the midst of several national forests and other national landmarks, especially fitting since 2016 was the 150th anniversary of the National Park System. Each one was spectacular and not one of our visits was long enough to properly take in the splendor. Even so, we were fully engulfed in the joy of the experience, and now we know where we want to spend more time in the future.

I’ve already written about—and posted lots of photos of—The  Badlands. Our reluctance at leaving there was matched only by our anticipation of visiting The Black Hills National Forest, just a couple of hours away. The Black Hills are full of tourist opportunities, including Wind Cave National Park and Jewel Cave National Monument. Unfortunately, we couldn’t figure out a way to make room in our tight schedule for either of those sites. (But as I’ve written before, we’ll be back!)

Mt. Rushmore National Memorial is clearly the most iconic and recognizable tourist site in the the Black Hills. Its size alone is dramatic. The mountain’s presidential stone-carved faces can be seen from miles away and from many different perspectives, but to really get a sense of the size of the thing, you may want to visit the memorial itself, which also has a number of ranger talks. Entry and ranger talks are free, but there’s a $10 parking fee ($5 for seniors). 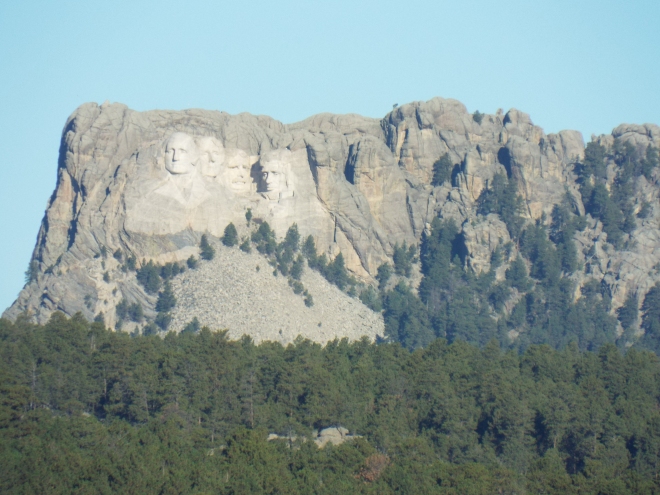 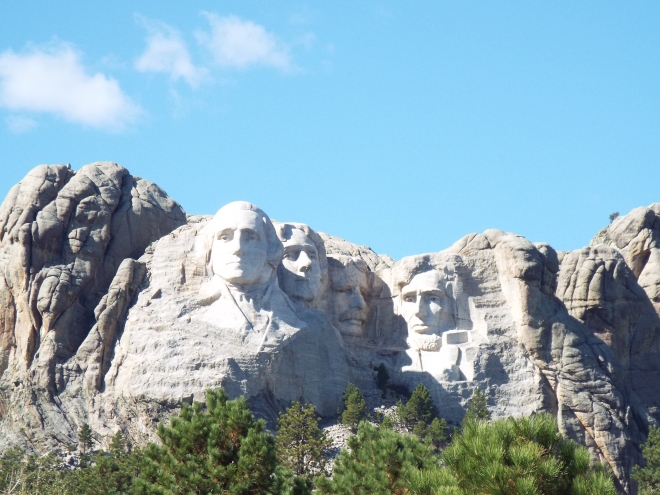 One of the most striking views of Mt. Rushmore came unexpectedly as we were emerging from one of these wee tunnels, the edges of the tunnel acting as a frame for a magnificent portrait.

The forest shares a border with Custer State Park, a unique experience all its own. It’s a fairly long drive from Keystone, the nearest town, to get to the park. Though the scenery along the way is fantastic, the park proper is where the fun really begins. Next time, we’ll plan on renting a cabin inside the park boundaries—and taking all our food and necessary supplies. That way we won’t waste precious time getting to and from. In the park is the eighteen-mile Wildlife Loop Road you can drive in hopes of close-up encounters with wildlife like bison, donkeys, prairie dogs, and big horned sheep, as well as the the fourteen-mile Needles Highway. I promise, you don’t want to miss either of these spectacular drives.

Between the Badlands and the Black Hills, there’s enough to keep you gobsmacked for a full two-week vacation, even without stopping at the many commercial tourist attractions along the way, though you can certainly check those out, too.

(You can see more Black Hills and Custer pictures here.)

Our next National Park visit was to Glacier. We were so busy taking pictures of gorgeous scenery along the way that all we had time for once we were in the park was the two-hour drive up Going-to-the-Sun Road to Logan’s Pass (6646 ft.) and back down again. Better go soon if you want to see any glaciers. They’re melting fast. The 150 glaciers that inhabited the park in 1850 have now shrunk to a mere 25, and all of those are slated to disappear in the next few decades. The park will have to be renamed, perhaps to Glacier Memorial National Park in honor of the glaciers that once were.

Our first peek at a Glacier NP peak 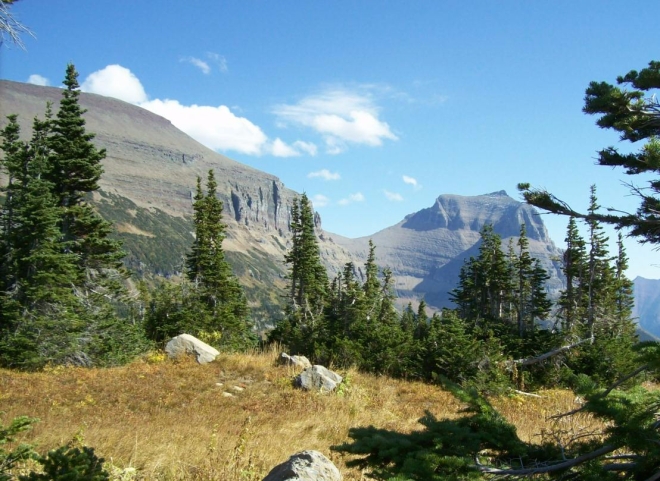 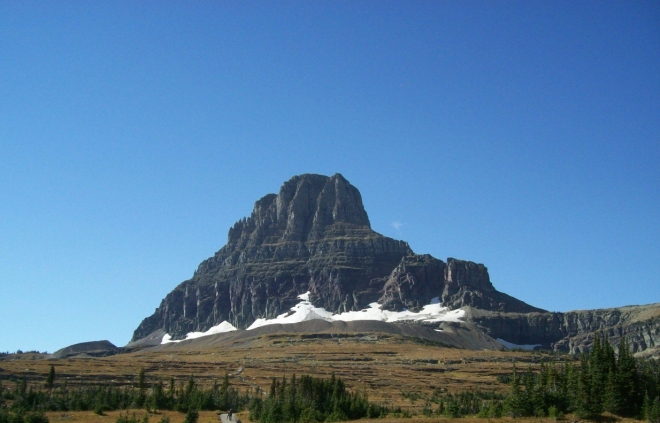 What an engineering feat it must have been to build the fifty-mile-long Going-to-the-Sun Road in the early 1900s.

We traveled through a portion of the Grand Tetons on our way to Yellowstone. It was a cloudy, foggy, misty day so the view was a little different than it would be on sunny days, but still stunning in its own way.

We were welcomed to Wyoming with this billboard and vistas of Grand Teton NP. 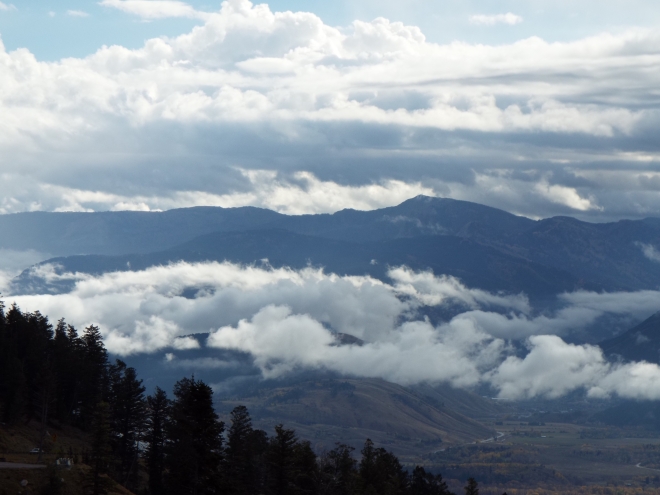 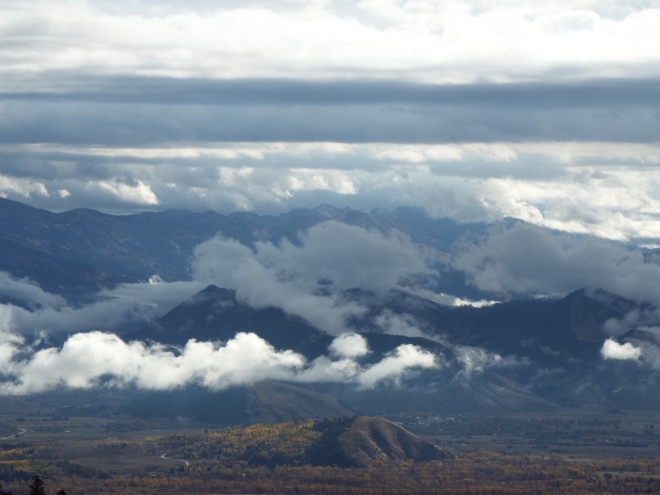 We didn’t get to see much of the Grand Teton mountain or her two sister peaks on this cloudy day. Controversy surrounds their naming. By far the most colorful explanation is that early French Canadian explorers from the Northwest Company, upon seeing the three peaks of the range, called them “Les Trois Tetons,” or “The Three Breasts.”

I can’t remember a time in my life when I didn’t long to visit Yellowstone National Park. Back in the sixth grade, when one of my schoolmates returned from summer vacation bragging about her Yellowstone trip, I was too jealous for words. So no way were we traveling to Montana and Wyoming and miss out on my big dream.

Yellowstone. Yes, we knew it was big. But you cannot begin to comprehend its size until you’re right there in the thick of it. To put things in perspective, a friend told me that after her family had entered the park, it was another fifty miles to their campsite. You could spend weeks in Yellowstone and not begin to see it all. (And we just had an afternoon!)

It took us a while to figure out that all those white wisps we were seeing off in the distance weren’t fog, but geysers. I’d forgotten that Old Faithful wasn’t the only one. There are actually 500 geysers and 10,000 thermal features in all. In other words, they’re everywhere!

A cluster of steamy spots

We arrived at Old Faithful just as its display was ending. That was a good thing—the wait for the next show meant we could stroll the boardwalk and see many more geysers as well as mud pots, fumaroles, and hot springs. We might have passed them up otherwise, and that would have been a real shame.

No, this isn’t Old Faithful, but Beehive Geyser, which shoots steam 200 feet into the air, more than 50 feet higher than its more famous sibling’s average. We lucked out—it can be days between eruptions. 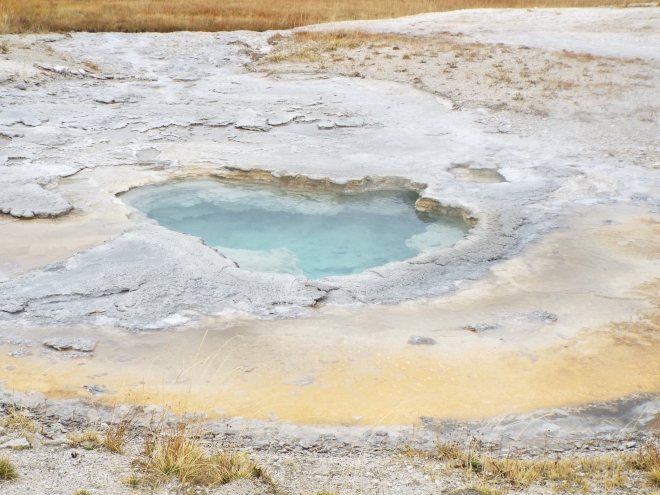 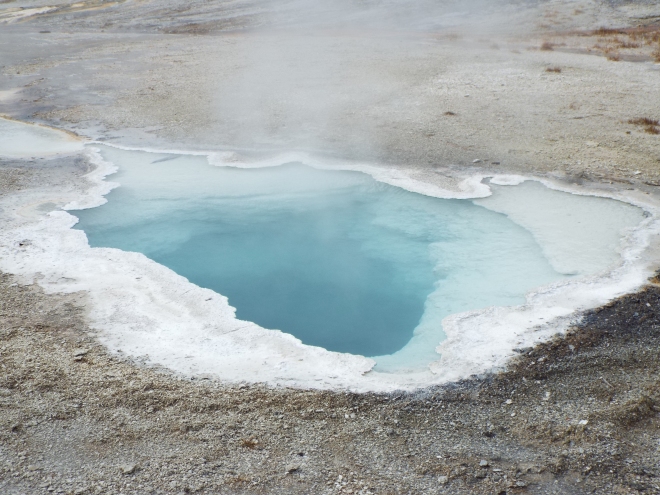 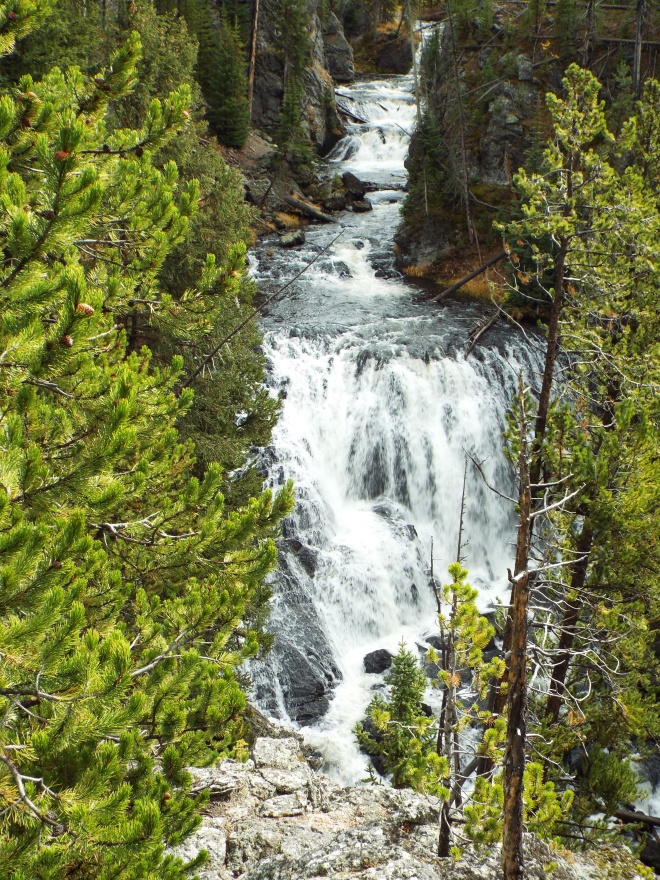 One of Yellowstone’s 300 waterfalls 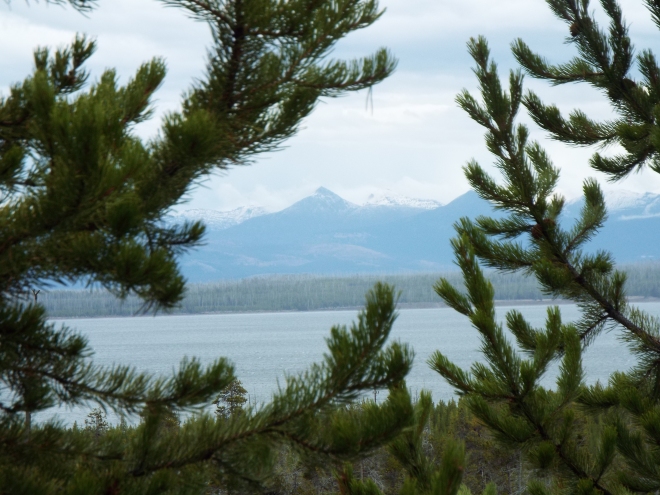 There are nine lakes in the park. At 136 square miles, Yellowstone Lake is the largest.

Our national parks, forests, monuments, memorials, trails, historic sites, and landmarks are indeed treasures. They are our heritage and our future. It takes only a visit to understand beyond measure that we must preserve and protect them for all to enjoy—today and all our tomorrows.