(The Gnome and I recently took a long (and long-awaited) road trip throughout Nova Scotia. To read about—and see—it from the beginning, click here.)

It was almost mid-afternoon on our trek around the Cabot Trail when we stepped into a small museum near Dingwall (on the northern edge of Cape Breton Highlands National Park) for a much-needed bathroom break. A couple of (very) young women from New Zealand had the same idea. (Amazing how you meet people from all over the world on the trail!) They were cycling the trail from the opposite direction. While we were going downhill, they’d been climbing all day, since dawn, in the chilly rain. How I felt for them!

I had to chuckle at the sign on the inside of the bathroom door. It said something to the effect of, “We get it. You really need to go,” and welcomed folks to use the amenities (they are few and far between on the trail), but it also asked for a donation if you planned to skip the museum itself. Fair enough! We decided to take it in, though. It was surprisingly professional and enlightening, especially for such a tiny place. There’s even an area for genealogical research. 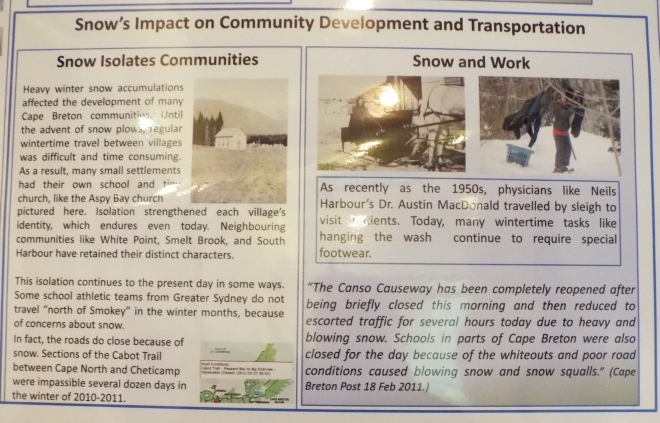 We saw lots of informational exhibits like this one at the North Highlands Community Museum which explains why all the island’s small communities are so tightknit. Note how doctors made house calls well into the mid-20th century!

Oh, my! I sat at a desk like these in my rural elementary school.

The pleasant woman staffing the museum told us she thought the part of the trail still ahead of us was its prettiest section. That was hard to believe, given the vistas of our previous two days. Turned out she was right, though the day was so stormy it wasn’t such a good picture-taking day. We decided to come back for more the next day, which was less rainy, but extraordinarily windy and often almost as hazy. Still, we took lots of photos. (You knew we would!) 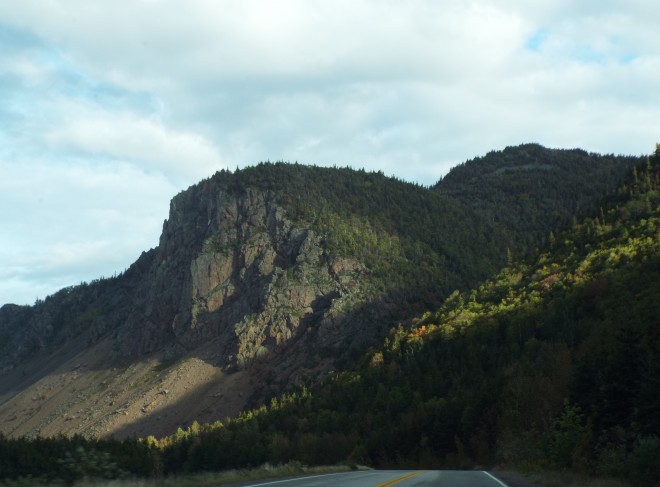 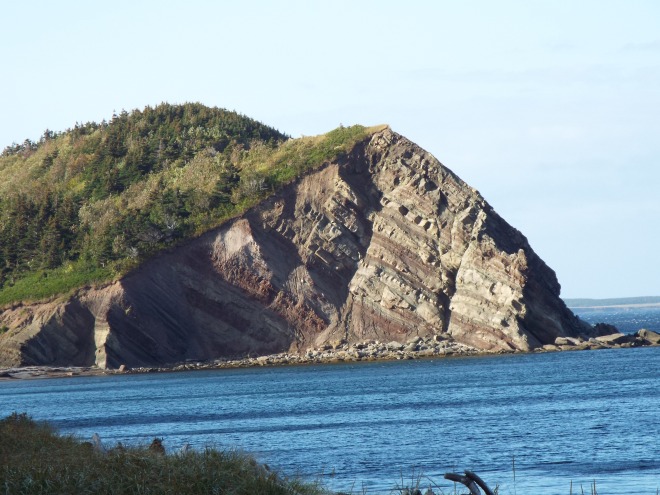 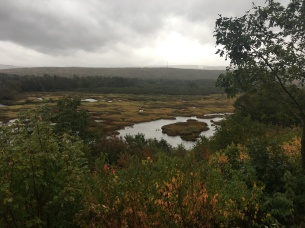 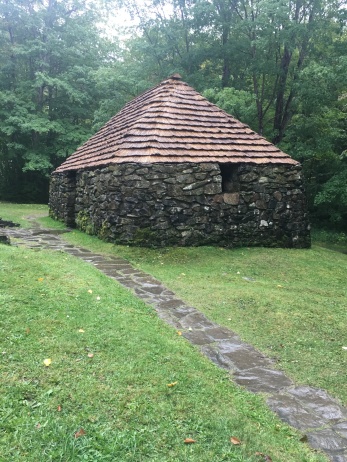 We took a few damp hikes, including the bog walk at which, if we’d been there a few hours earlier, we’d have surely seen moose—we sure saw lots of tracks. We also hiked the short trail to this Scottish Highland shieling, a hut to shelter crofters (farmers) and their livestock from the brutal weather on the moutaintops. And we hiked enough of the Skyline Trail to see . . .

this! After 49 years’ worth of trips searching in vain, we were able to prove to ourselves once and for all that moose are not the mythical creatures we’d begun to believe them to be.

From the road far below, you can see folks that made it to the end of the Skyline Trail, at least with binoculars—or a telephoto lens.

Photos of the curvy, coast-hugging Cabot Trail, where the mountains kiss the sea.

Our destination was Chéticamp. Little did we know that on one of our look-off stops, our camera had captured an image of the home where we’d be spending the next couple of nights.

Our charmed, and charming, hosts had found themselves one of the most perfect places on earth to live. Not only is their home on the edge of the Chéticamp River (which they often kayak, lucky ducks!), but on the opposite side of the river is the majestic park itself. From their huge living room windows, they can also see where the river empties into the Atlantic Ocean. Where else could you get that kind of view? It was a good way to end our trip around the park. 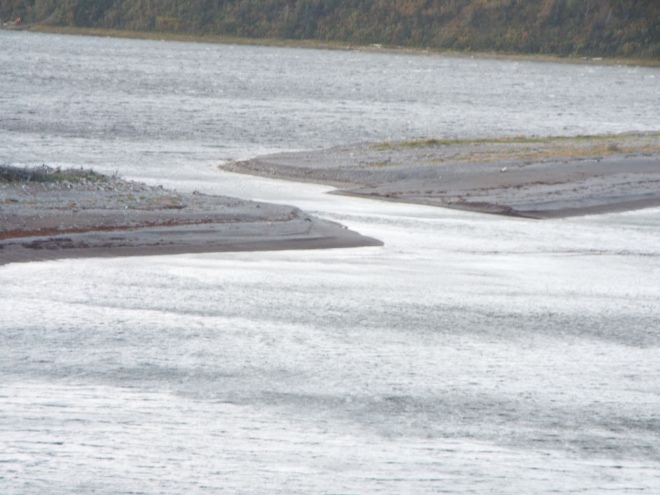 This spit of land is all that separates the river from the ocean, also seen from our hosts’ living room window. How cool is that?!

Come back for the last days of our travel adventure and some more reflections, won’t you?