Well, I learned something new the other day!  When we moved to the North Carolina mountains several decades ago, the Gnome and I were taken with the many new-to-us wildflowers growing along roadsides. One, we were told, was phlox, also known as summer phlox, tall phlox, or garden phlox. Phlox paniculata.

Now, we knew about phlox—creeping phox, that is, otherwise known to us as thrift—those mounds of pinks, blues, and violets that cascade over rock walls. Quite a ground cover. Phlox subulata.

This tall phlox  was new to us. Same colors, it grows in clusters on tall, slender stems. Every year we see them brightening up already bright spring days. (Or so we thought.) 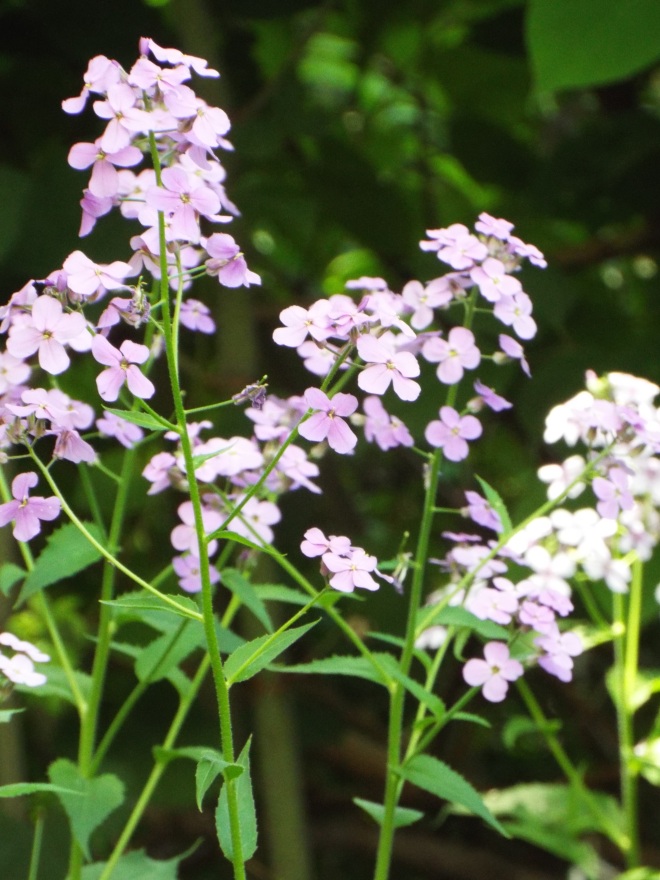 This year, they seem to  be growing in particular abundance–on road shoulders, next to creek beds, on hillsides. But, it turns out, this spring wildflower I’ve been admiring isn’t phlox at all. How about that? What I’ve been admiring this spring is dame’s rocket, sometimes known as gilliflower. Hesperis matronalis, if you’re interested.

I think I can be forgiven for confusing these plants. To the casual—or not so casual—observer, they look identical. Same growth pattern, same height (around two to four feet), same color palette, they grow in similar environments. There are subtle differences, though, and you’d have to get a much closer look than you can when you’re driving past. Dame’s rocket has four petals, while phlox has five. (An easy mnemonic: dame = four letters; phlox = five letters. How convenient!)

This one is phlox.     http://commons.wikimedia.org/wiki/User:Epibase

There’s an easier way to recognize the difference in these two flowers, and it has nothing to do with the appearance of the blossoms: dame’s rocket is a spring flower; phlox blooms later in the summer.

Both are fragrant in the evenings and relatively scentless earlier in the day. The flowers of both dame’s rocket and Phlox paniculata (but not annual or creeping phlox) are edible with a mild, spicy-sweet flavor. Dame’s rocket is a close relative of arugula and mustard and, like them, its leaves (which are best eaten before the flowers blossom) have a slightly bitter taste. Flowers and leaves would make a lovely addition to salads. Sprouted dame’s rocket seeds are also edible.

Moreover, dame’s rocket has been used for medicinal purposes, and it’s also known as an aphrodisiac. Who knew? (Not me. I didn’t even know its name!)

Sad to say, this spring bloomer is considered an invasive species in most states. Seems it has a take-charge attitude, pushing aside more polite plants. So, I won’t be buying any dame’s rocket seeds or digging up roadside plants to pretty up my place. But I’m sure going to enjoy them on country drives. And now that this ‘old dog’  has learned the difference between dame’s rocket and phlox, I think may appreciate both of them even more.

2 thoughts on “Never Too Old To Learn”